How to Make a Boolean Toggle in Tableau

This is the second in a three-part series on toggles in Tableau – subscribe to receive future updates.

Last week I showed you how to filter marks on and off using a Show/Hide button on layout containers. That approach is the easiest possible way to make toggles in Tableau and works particularly well if you only need to filter marks on a single sheet.

Of course, sometimes you need to toggle results on and off across multiple sheets on a dashboard. This post will show you how to use a single toggle button to filter marks on and off across multiple worksheets. I’ll also show you a trick for automatically deselecting dashboard objects to get around the pesky borders that appear and so your users won’t have to double-click.

For this tutorial, we will create a toggle that allows the user to decide when to look at data per capita instead of actuals. Click to view the interactive / download the workbook.

First, find your images. For best results and the most flexibility, find or create images in a PNG file type with transparent backgrounds. Here’s the image I’ll use when the dashboard is showing the raw underlying data.

Here’s the image that will be used to represent when the toggle is turned on and we’re using data per capita.

This formula says if the current value of the Toggle parameter is False, show True and when the Toggle parameter is True, show False. This will allow us to jump back and forth between the image of the on and off buttons. This approach is most-similar to how Zen Master, Ken Flerlage, shared how to turn instructions on and off in his post, Fun with Tableau 2019.2 Parameter Actions. It’s towards the end, but well-worth making your way through all the great demonstrations in the post.

Now that we have the calculated field, we can create the button by creating a new worksheet, changing the mark type to Shape, and dragging the newly created “Toggle Button” field onto the Shape Marks Card.

The current value of the Toggle parameter is True, and because our Toggle Button calculated field will always display the opposite of the parameter selection, we see a shape for False. This mapping is a little tricky because our logic is reversed. While we see a shape for False, the current value of the parameter is still True. So that it’s easier to think through the logic for all of the sheets controlled by this toggle, I recommend that you map the “On” button for the False shape and “Off” button for the True shape, even though it feels counterintuitive at the moment.

To turn this shape into an image of the On button, click the Shape Marks Card, click the “data item” you want to map, and find the shape you want to map from the shape palettes on the right. If you already had Tableau open when you added the toggle images to your Tableau Repository, you will need to click the Reload Shapes button before they will show up.

To map the Off button, start by changing the current value of the parameter from True to False by right-clicking on the Toggle parameter, choosing “Edit”, and changing the Current Value.

By changing the current value from True to False, the Toggle Button calculated field flips to “True”, and we can now map the shape for True as we did for False.

Next, we’ll incorporate the Toggle parameter values in whatever calculations we want influenced by this toggle button. This section is completely up to you to apply to your own use case, but to continue with my example, I’ll create a calculated field that shows sales from the Sample – Superstore dataset when the toggle is turned off, and sales per capita when the toggle is turned on.

The formula for this calculation is:

Sales per capita is created by dividing sales by the population in each state, which I joined in from a different data source.

How to Turn Normalization On and Off in Tableau

From here, create as many sheets as you want that use this parameterized measure. You can also create additional calculated fields that incorporate the Toggle parameter (i.e. profit instead of sales), but to keep things simple for this tutorial, I will create two views using the “Sales // Sales Per Capita” measure: a US map and top 10 bar chart.

Sales // Sales Per Capita by US State

Sales // Sales Per Capita Top 10 by US State

Bring the Toggle to Life with Parameter Actions

To activate the toggle button, add a “Change Parameter” dashboard action by navigating to Dashboard > Actions and clicking the Add Action button.

In the options that appear, choose the toggle sheet as the source of the action, target the Toggle parameter, and overwrite it with the Toggle Button calculated field.

After clicking the OK buttons to close the actions setup, clicking the toggle in the top-right corner will make the toggle flip to the on position, and the sheets on the view show sales per capita!

This has already made my toggle dreams come true, but there are two things bugging me. Tableau shows a border around selected objects, which we’ve done by clicking on the button. This doesn’t look great, but what’s worse, we would have to first deselect the object before turning the selection back to the off position. This means an extra click for our users and a less than ideal experience.

There’s an easy fix for both drawbacks. Add a Filter dashboard action with the Toggle button as the source of the action and the Toggle sheet as the target of the action.

This automatically deselects the button, so the border goes away and the user’s very next click will toggle the button again! Here’s how the view looks after turning the toggle back off. 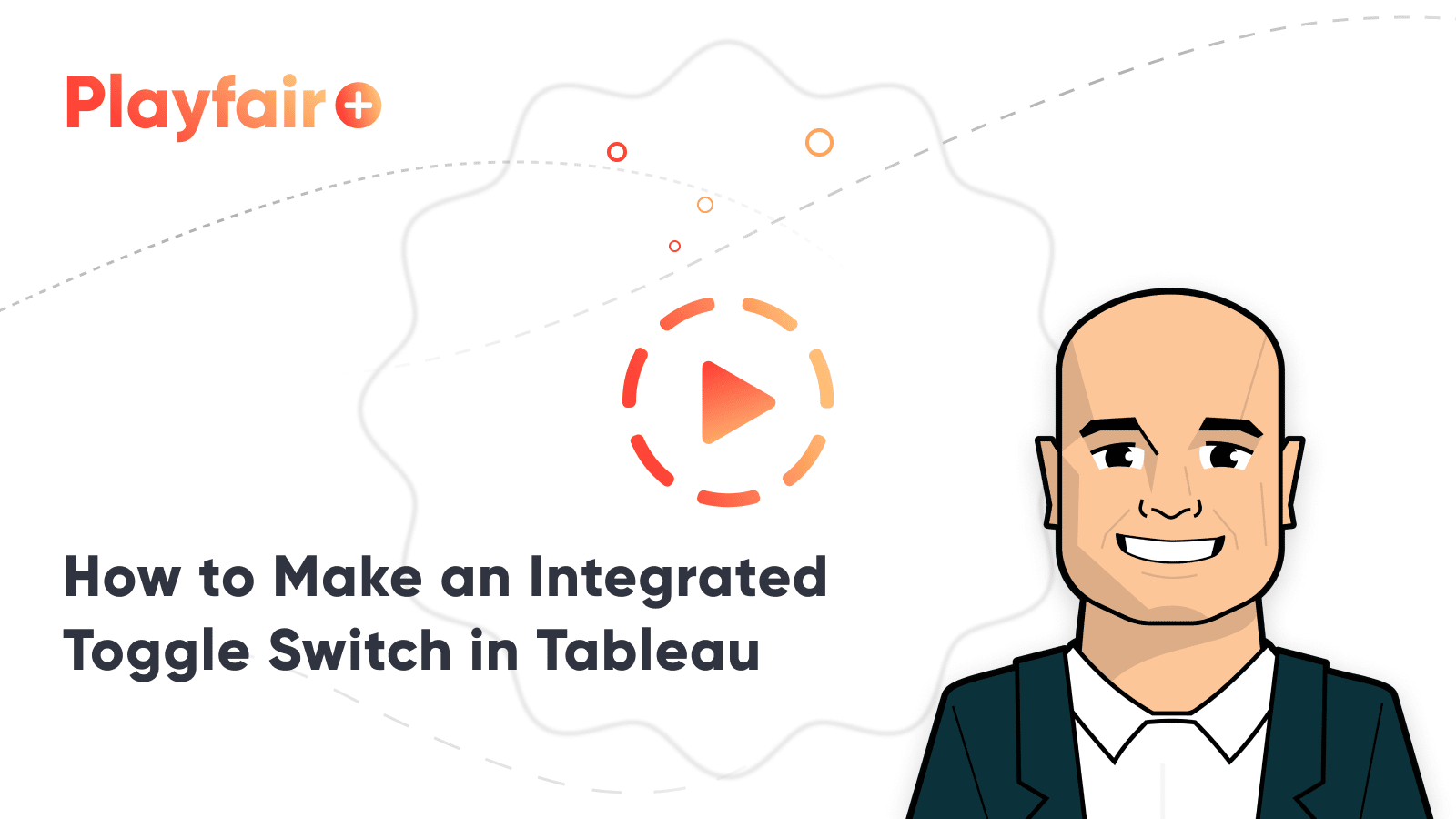 How to Make an Integrated Toggle Switch in Tableau

This is the third in a five-part series on dashboard gauges in Tableau. For future updates, subscribe to our mailing…

Innovative Tableau is now available for pre-order at Amazon! To celebrate, we’re sharing a full-length chapter excerpt from the forthcoming…