One of the primary elements you’ll find on almost every high-level corporate dashboard that I ever create is a callout that conveys the current performance of the KPI by some comparison point (i.e. goal, prior period). I’ve shown you before how to make “performance indicator titles” in Tableau, but I usually take these a step further by displaying the KPI’s performance and color it based on a 100-point index or percent change.

I like this this element for several reasons: (1) it provides the exact numbers for my stakeholders that are accustomed to viewing reports as raw data, (2) it forces them to benefit from the pre-attentive attribute of color, and (3) it is descriptive and helps the user decide if they should invest further time for investigation. This post will show you two design options for creating a current versus comparison index callout in Tableau.

How to create a current versus comparison index callout in Tableau

It also makes the math very easy. A score of 100 means the current performance outperformed the comparison; a score less than 100 means the current performance underperformed the comparison. Since everything is based on a 100-point scale, you simply subtract 100 to compute the change. For example, an index of 120 means a 120 – 100 = 20 point improvement.

The formula for a 100-point index is:

Now that we’ve isolated the current performance, the prior performance, and the comparison index, we’re ready to make the dashboard element. The only way to combine different fields and different mark types, is to use this trick to conditionally format individual rows or columns in Tableau like you can in Excel. The technique involves setting up a placeholder calculated field with the formula MIN(0); then placing the calculated field on the Rows Shelf three times. 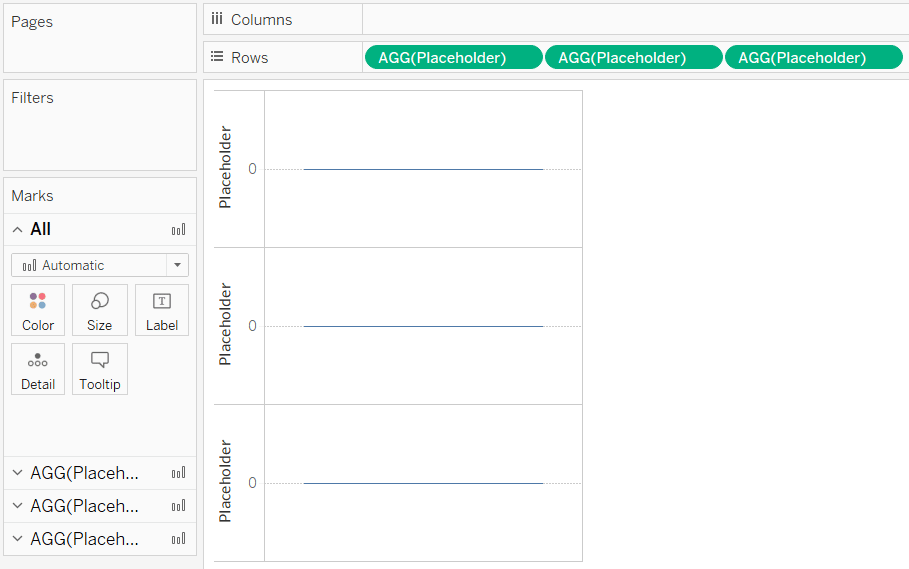 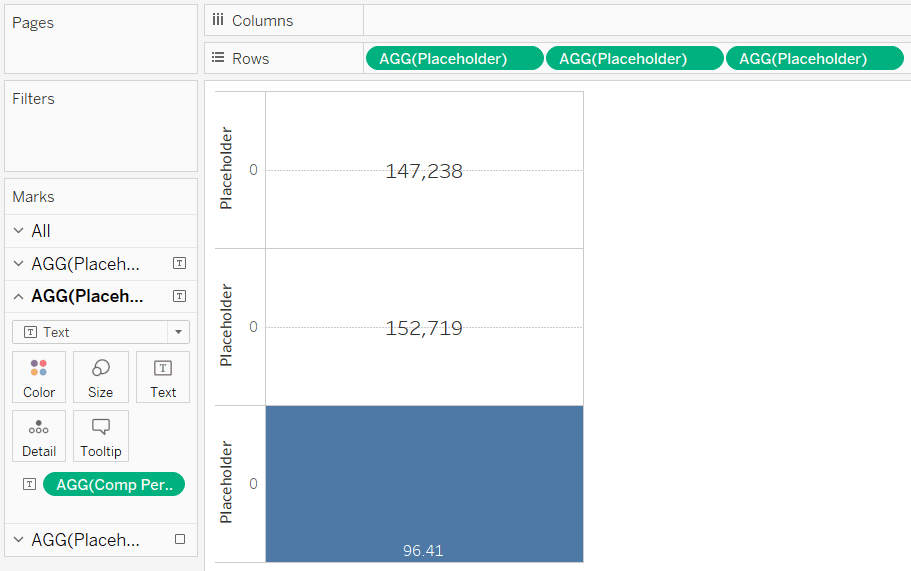 This approach works okay when you’re only making this index callout for a few metrics, but can be a bit manual with all of the calculation creation. There is a way to automate this coloring that is beyond the scope of this post, so I’ll throw in a shameless plug and let you know that it’s outlined in chapter 61 of Practical Tableau. The coloring is much easier if you only want to communicate a positive or negative change; you would simply place the index score on the Color Marks Card and modify the colors so they’re on a diverging color palette, with a step size of two, and a center of 0.

Lastly, the only thing you lose with this placeholder hack is the title of each row. However, you can add that by modifying the text on the Text Marks Card. Here’s how my final dashboard element looks after tweaking the format, adding sheet titles via the Text Marks Card, and coloring the index score by my newly created Index Color calculated field. 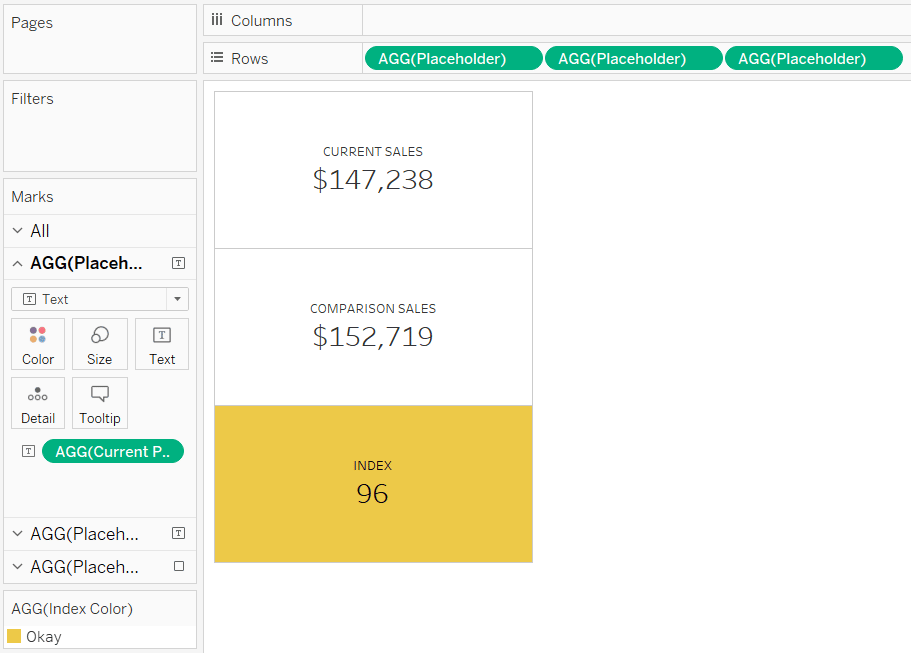 An alternative current versus comparison index callout in Tableau

I like what we have so far because it displays the exact numbers for the current and comparison performance and it also introduces the pre-attentive attribute of color so my stakeholders can see at a glance how they are doing across key performance indicators. But in the spirit of minimalism, lately I’ve been gravitating towards a slightly different look that collapses the three rows into one.

If you were following along, you already have the calculations and foundation required to create this second look. For this second approach, we will be showing just the current performance and coloring the entire element based on the period versus comparison index. One approach to creating the second view is to remove the first two rows from our first index callout, replace the index score on the label with current performance, and update the element title. 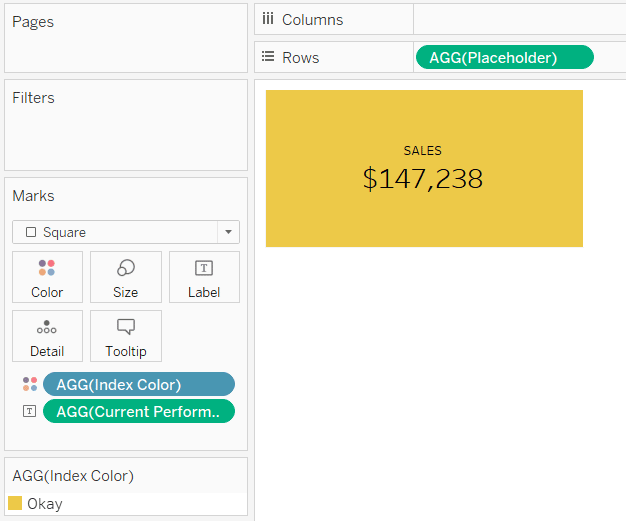 With this style, I like to add either the index point change or percent change following the current performance. As most are new to the 100-point index, this time I’ll show a percent change. The calculation is: 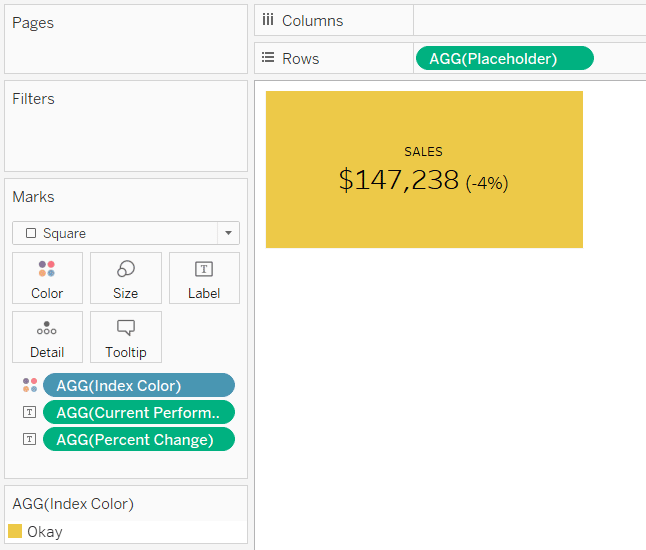 In this case, the current versus comparison performance was down, but within 10%, so the element turned yellow. If I were to change the comparison to March, where the underperformance was greater than 10% (an index of 90 or less), the element changes to a second color to communicate “Bad”. 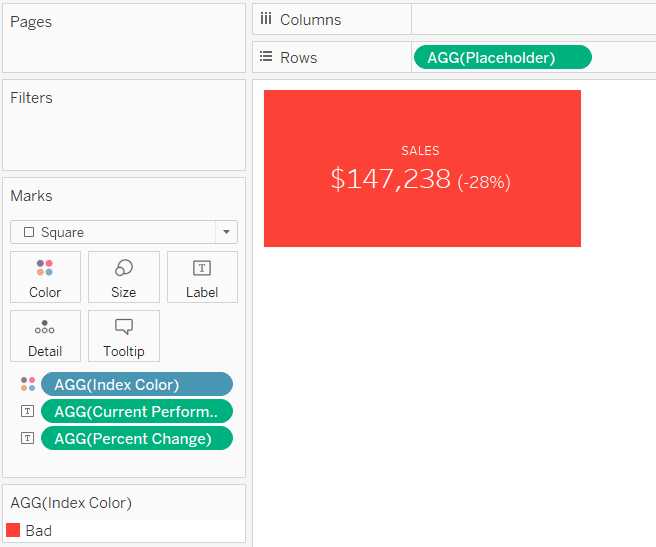 If I change the comparison to a month that July outperformed, such as April, the element turns a third color to communicate “Good”. 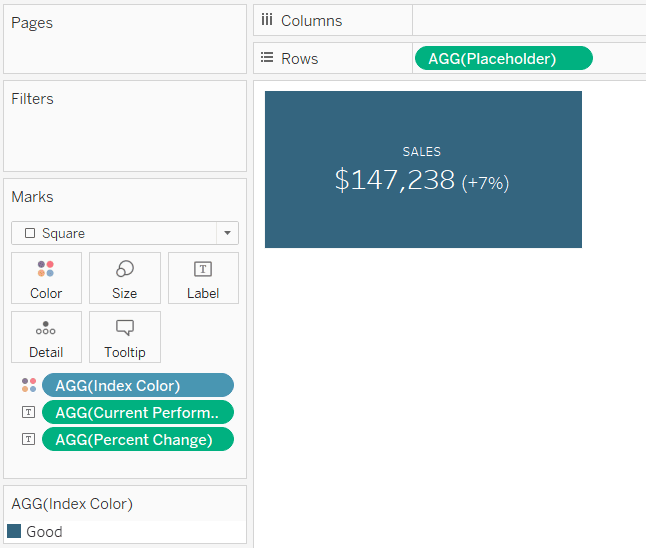 Whether you prefer the first or second style, I recommend placing a series of these elements across the top or down the left side of your summary dashboard to provide a starting point for your descriptive analysis. Once you’ve got it down, take the percent change formatting a step further by incorporating alt-code triangles into your dashboard elements. 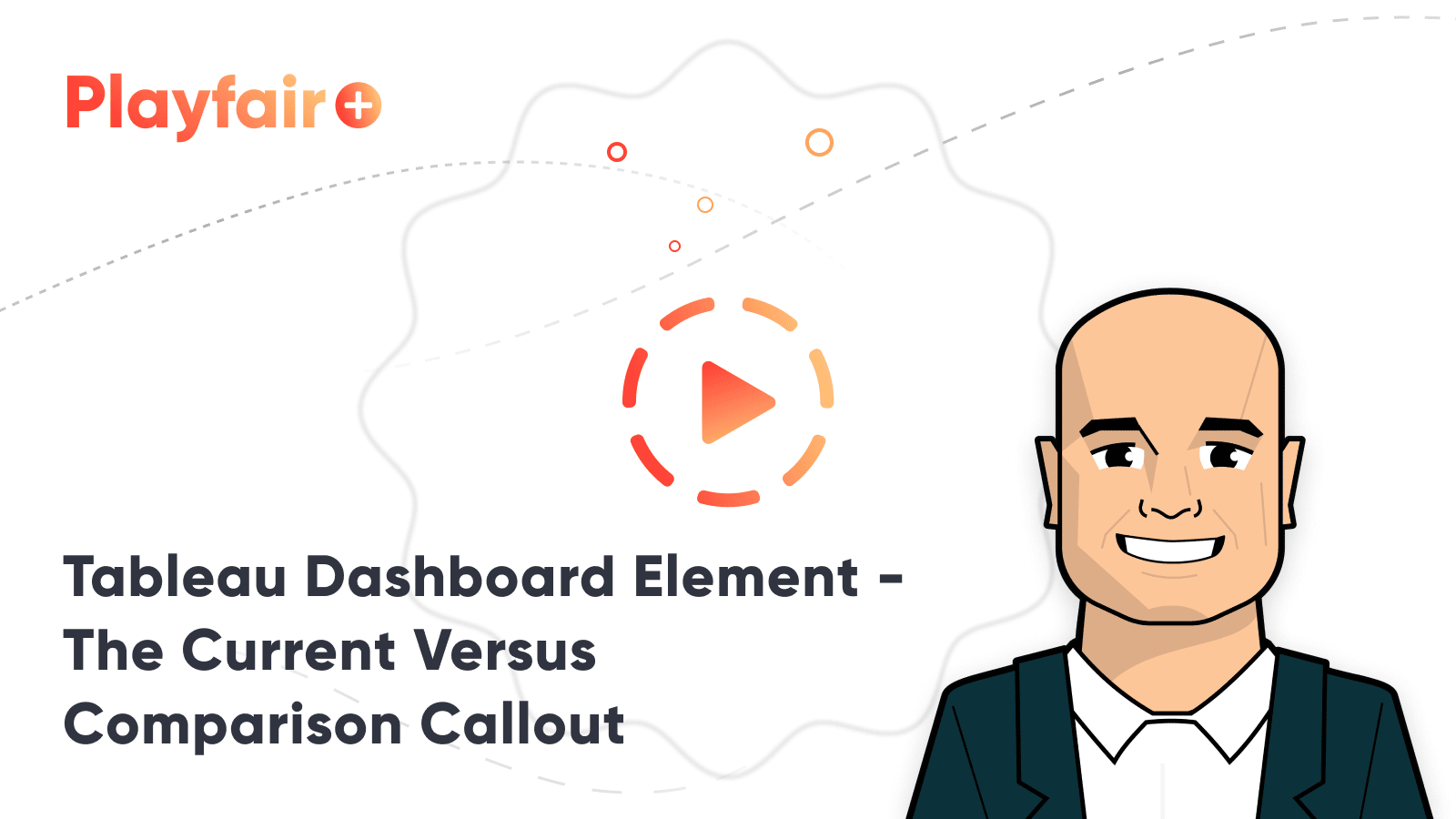 How to Do Pagination in Tableau

To celebrate the release of Innovative Tableau: 100 More Tips, Tutorials, and Strategies, I’m releasing some bonus content to show…

3 Innovative Ways to Zoom in Tableau

As our dashboards get more complex, we can sometimes be limited on space. It’s hard to find a happy medium…

Dashboard actions, filters, and parameters are three of the best tactics to use in Tableau because they provide a way…